Senate Democrats and Republicans unveiled the final text of the roughly $1 trillion bipartisan infrastructure spending bill late on Sunday, August 1. Senate Majority Leader Chuck Schumer (D-NY) assured reporters that the bill would succeed, but is the senator’s confidence misplaced? With a second, larger spending package of $3.5 trillion on the horizon, it may be his own party that scuppers the whole deal. Fellow New Yorker, Representative Alexandria Ocasio-Cortez (D), insists that if the Senate does not get the larger spending package through reconciliation (meaning it can pass with a simple majority), the smaller bill will face opposition in the House. She told CNN, “If there’s not a reconciliation bill in the House and if the Senate does not pass a reconciliation bill, we will uphold our end of the bargain and not pass the bipartisan bill until we get all of these investments,” adding that the House has “more than enough” votes to block everything.

House Speaker Nancy Pelosi (D-CA) has also indicated that unless the Senate goes the reconciliation route on the larger deal, that the smaller spending bill may not even make it to the House floor. “I hope that it will pass. I won’t put it on the floor unless we have the rest of the initiative,” she said. “I’m telling you what’s going to happen in the House of Representatives, and that is that we’re rooting for the infrastructure bill to pass, but we all know more needs to be done,” she added, referring to the Senate passing the $3.5 trillion via reconciliation.

Sen. Bernie Sanders (I-VT) also joined the chorus of dissent, tweeting that, “Rebuilding our crumbling infrastructure is important. Addressing the long-neglected needs of working families is even more important. And we MUST address the existential threat of climate change. There can be no infrastructure bill without a reconciliation bill.”

Whether the Senate can pass the bill through reconciliation is another problem in itself. While the smaller bill seems to have enough support, even some of those who negotiated on behalf of the Democrat wing, Sens. Kyrsten Sinema (D-AZ) and Joe Manchin (D-WV), appear unwilling to back the process for the larger bill.

Sinema released a statement last week in which she expressed her opposition to the cost of the new proposal. She wrote, “While I will support beginning this process, I do not support a bill that costs $3.5 trillion—and in the coming months, I will work in good faith to develop this legislation with my colleagues and the administration.” Manchin also appears to have concerns regarding the price tag. He said, “You get to the point like you do in your own private life, what can you afford to pay for?”

But it is not only moderate Democrats who are wary of the price tag and what the measure may include. 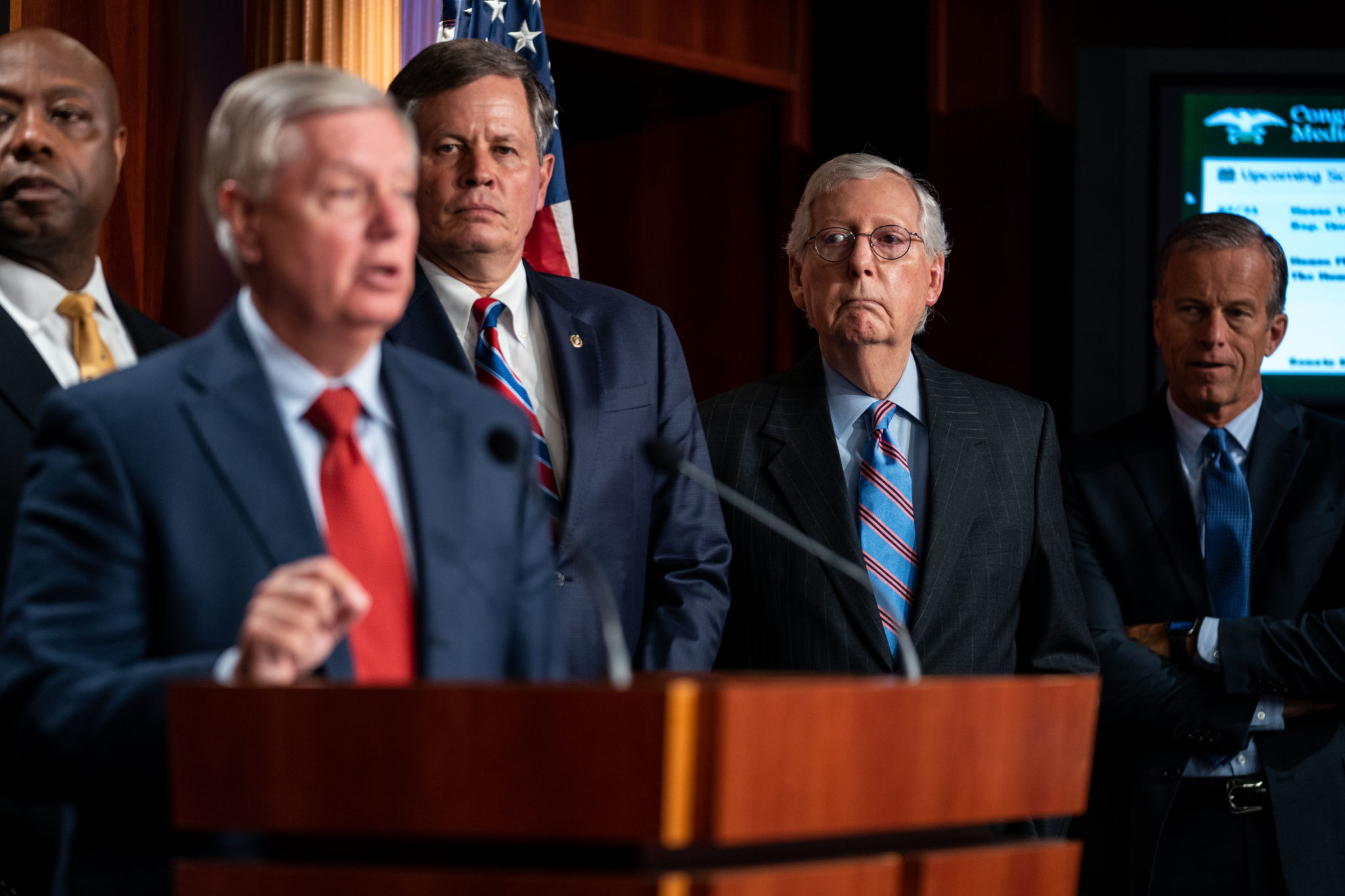 According to Newsweek, the reconciliation package would include “two years of free community college, clean energy requirements for utilities, universal prekindergarten, and would lower prescription drug prices. Green cards would be offered to some undocumented immigrants and medicare benefits would be expanded as well.” Senate Republicans are already balking at the idea that it would include some form of immigration amnesty.

Senator Lindsey Graham (R-SC) expressed his opposition, claiming that the package is little more than a “power grab.” He went further, saying:

“If you give one person legal status there will be a run on our border like you have never seen before … [this is] the dumbest idea in the history of the Senate, the history of the White House. It will lead to the breakdown of law and order beyond what you see today.”

He reiterated that the proposed spending doesn’t have a “damn thing to do with infrastructure.”

Dreams and rhetoric on the essence of “unity” were the watchwords of Joe Biden’s campaign for president. It was a message that appealed to many voters and was pushed with glee by a Fourth Estate hungry to display how divisive President Trump’s four years in office were to the United States. Lunging from crisis to crisis with few remedies, the Biden administration is widely regarded to have fallen short of its promise of harmony.

With mounting opposition to what is being portrayed as a legacy spending project from both sides of Congress, President Biden may just have united Democrats and Republicans in opposition. Progressive Squad members joining forces with fiscal conservatives was perhaps not the vision of accord that the commander in chief had hoped for, but that is what he appears to have achieved.

The post Can Senate Infrastructure Bill Leap the House Hurdle? was first published by Liberty Nation, and is republished here with permission. Please support their efforts.

Featured Posts
Former Top Trump Official: We Must Clean Out The FBI And The DOJ
1 hour ago

Mike Rounds: ‘We Should Be Removing Barriers To Addressing Homelessness, Not Creating New Ones’
6 hours ago