At the podium Aug. 3, President Joe Biden vowed to get busy with increasing vaccinations across the United States and the rest of the world to combat COVID-19. But, unfortunately, a weary and now-wary public seems to be taking a heavy toll on the beleaguered president, who appeared exhausted, forgetful, and inarticulate with simple words and phrases.

The White House announced before Biden took the stage that the United States has provided 110 million doses of COVID-19 vaccines to more than 60 countries – a milestone – yet a woefully tiny portion of what is needed worldwide. The president was quick to reiterate to reporters that the United States will be the “arsenal of vaccines” for the entire planet and repeated his claim that this is a pandemic caused “by the unvaccinated.”

He continued with a warning about misinformation and declared “here’s the truth”:

“If you’re vaccinated, it’s unlikely you’ll get the COVID. And even if you do, the chances are you won’t show any symptoms. And if you do, they’ll most likely be very mild. Vaccinated people are almost never hospitalized with COVID.”

Biden threatened Facebook not too long ago, calling the platform out for “killing” people by not silencing anti-vaxxer conversations – resulting in unanticipated and stiff blowback. The social media giant took no prisoners advancing on educating the White House on who the real boss is. 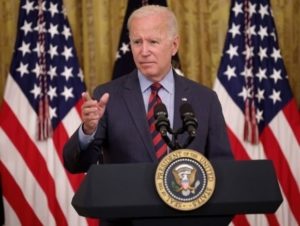 Biden went on blaming the unvaccinated for 95% of current cases, hospitalizations, and death. Quoting stats from different – unnamed – studies, he also claimed that 99% of those people getting sick, hospitalized, and succumbing to the Delta variant are unvaxxed.

At one point, pounding the high numbers of cases, Biden proclaimed, “I think, no, I know, I don’t think,” there is a clear link between states with heavy cases and high numbers of injection refusers.

The president expounded on spreading vaccines throughout the world, through a charitable vaccine sharing plan. COVAX, a program run by the U.N. and international non-profit groups, is designed to help lower- and middle-income countries. Three quarters of American donations are made through COVAX, with 25% distributed to American allies; as a result, the United States has shipped the most vaccines abroad of any donor nation. As the president was proud to say, countries from Afghanistan to Zambia are now able to dispense the vaccine. And, Biden claimed, “there are no strings attached.”

But what is happening inside the borders of America, Biden’s first and foremost responsibility? Approximately 90 million folks able to receive the vaccine have not taken the first dose, a troubling statistic for the administration. According to Biden, “No wall or ocean can keep us safe.”

For more than a month, the Centers for Disease Control (CDC) has revised, time and time again, recommendations on masks: wear one mask, wear two, even if fully vaccinated. The chief medical adviser to the president and National Institute of Allergy and Infectious Diseases director has perhaps been even less consistent. This has some Americans rebelling against top doc Anthony Fauci for flip-flopping on his public stances. The revelation of Fauci’s private emails and exasperated missives did not make the public feel any safer; thus, many dismiss presidential mandates as mere threats. One particularly damaging email from Fauci reads: “The vast majority of people outside of China do not need to wear a mask. A mask is more appropriate for someone who is infected than for people trying to protect against infection.”

But here the nation is, back to masked faces. And again, Biden doubled down on the requirement for all federal employees to be vaccinated and called out individual states such as Florida and Texas for not getting into lockstep with the federal government. Same old lecture, same old blame game approach. But in a new twist was a veiled reference to having corporate America step up before 2022. “If some governors aren’t willing to do the right thing,” Biden suggested, they should “at least get out of the way.”

But the CDC released data that show those who have been vaccinated can still get COVID and spread the virus. Even faithful followers of the ever-changing guidelines are still contracting and spreading the bug. On Aug. 2, Politico reported that “vaccination rates have climbed in recent days, buoyed in part by the highly contagious Delta variant of the coronavirus, which has spiked cases and hospitalizations nationwide – hitting areas with low vaccination rates especially hard.”

Biden then went all in. “People are lying in bed, many dying and asking, ‘Doc, can I get the vaccine?’ Doctors have to look them in the eye and say, ‘No, sir, it’s already too late.’”

The People Are Exhausted

It appeared Biden simply regurgitated that vaccines are the only way to go, and by controlling the pandemic in his backyard, the world will surely follow suit. But, unfortunately for Biden, it may be “already too late.” Worn down by the shifting sands of government orders, Americans are tuning out and practicing their own protective measures.

The post Biden Scares and Keeps Score in the COVID Game was first published by Liberty Nation, and is republished here with permission. Please support their efforts.