It’s always frustrating to read about the many ways the federal government wastes our money, from millions spent putting lizards on treadmills to thousands spent on art classes in Kenya. But regular government waste pales in comparison to the appalling reality that the US just left billions in taxpayer-purchased military equipment behind in Afghanistan—to fall right into the hands of the Taliban.

The Times of London reports that the US simply abandoned a truly astounding arsenal of military equipment and weapons. This reportedly includes up to 22,174 Humvee vehicles, nearly 1,000 armored vehicles, 64,363 machine guns, and 42,000 pick-up trucks and SUVs. So, too, the list of allegedly abandoned weaponry includes up to 358,530 assault rifles, 126,295 pistols, and nearly 200 artillery units. Oh, and the Taliban will likely inherit state-of-the-art military helicopters, warplanes, and other aircraft from the US, too.

The US sent this equipment to Afghanistan to arm the Afghan security forces/alternative government we unsuccessfully sought to prop up. (That government has now collapsed and the Taliban is retaking control.) While some of our equipment may have been taken with US personnel when they fled Afghanistan, much of it is difficult to transport, and most of it likely remained behind amid a chaotic withdrawal. As a result, it will eventually fall into Taliban hands, if it hasn’t already.

This graphic from the Times sums up the maximum amount of equipment that could have been lost: 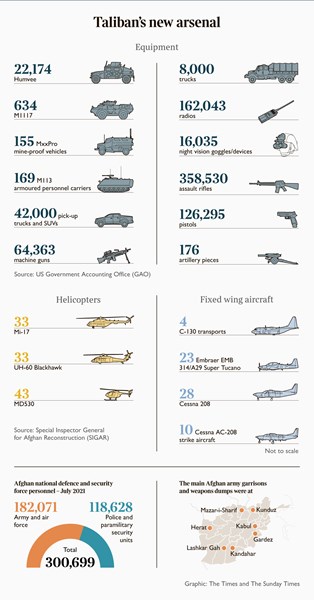 “The Taliban now has more Black Hawk helicopters than 85% of the countries in the world,” Congressman Jim Banks, a veteran, lamented. “But it’s not just weapons. They have night vision goggles, body armor, and unbelievably, the Taliban now has biometric devices which have the fingerprints, eye scans and biographical information of all of the Afghans who helped us and were on our side over the last 20 years. There is no plan by the administration to get those weapons back. There is no plan to account for any of this equipment or these weapons.”

Some media reports and social media posts have suggested that $85 billion in equipment was left behind, but this figure is misleading. The $85 billion price tag is the total amount the US has spent on security forces in Afghanistan. Yet a significant portion of that funding went to expenditures such as salaries, so it wouldn’t necessarily equate to that much in weaponry left behind.

But there was still a vast amount of taxpayer-funded military resources left behind. According to an expert interviewed by Politifact, the real monetary value of the abandoned equipment/weaponry is likely closer to $10 billion. That’s still an astounding amount to essentially give away to a hostile and oppressive regime.

This is worse than just waste—this taxpayer money actually went toward funding weaponry that will only do harm in the hands of the Taliban. Even if, hopefully, they are not in direct conflict with the US in the future, the Taliban will at the very least use this weaponry in pursuit of the oppression of women, LGBT people, and others under Sharia law. And they’ll do all of it with exponentially advanced military capabilities, courtesy of the US taxpayer.

At first glance, this waste, while especially egregious, isn’t particularly surprising. After all, the government is notoriously inefficient and wasteful. To understand why, consider that in everyday life, we typically spend our own money. Or, if we’re spending other peoples’ money, we’re usually spending it on ourselves. Either way, we’re incentivized to shop wisely.

Yet government employees are, as Nobel-Prize-winning economist Milton Friedman famously explained, ultimately responsible for spending other peoples’ money on other people. Government officials don’t have any skin in the game. Therefore, they have no real incentive to be frugal or get a good deal.

And when it comes to war, the bad incentives are even worse. The government is spending other peoples’ money on other people in another country halfway across the globe. As the US taxpayer’s multi-billion-dollar gift to the Taliban shows, that’s a recipe for not just waste, but disaster.

The post Here’s the List of Billions in Military Equipment the US Left Behind for the Taliban was first published by the Foundation for Economic Education, and is republished here with permission. Please support their efforts.