President Joe Biden donned his imaginary crown Thursday, September 9, and laid out a six-point plan that would mandate about 80 million more Americans get vaccinated, or else. Liberty Nation’s Kelli Ballard explained the plan in detail, but now it’s time to break down the list of folks whose jobs may depend on the jab and see whether the nation’s chief executive has the authority to enforce his will – or if he simply forgot he isn’t an absolute monarch.

As Kelli put it, “In a draconian move, the commander-in-chief ordered all businesses with 100 or more employees to require their staff get vaccinated or show a negative test at least once a week.” This mandate might be the most egregious – and the one that seems most like an overreach, as the others at least imply a federal connection. Sadly, that’s likely not the case, thanks to the Occupational Safety and Health Act of 1970, passed by both houses of Congress and signed into law by Nixon. This act established the Occupational Safety and Health Administration (OSHA) and granted it the power to make and enforce federal rules for employers – effectively putting them under the control of the federal government. Much in the same way that OSHA absolutely can mandate a hospital provide masks for employees or that a chemical plan both provide and require the use of a respirator for the sake of workers’ health, the federal agency which, as part of the executive branch, answers to Biden does seem to have the legal authority to enforce COVID mask and vaccine rules as well.

No, Biden can’t walk into a private company and start firing folks any more than he can hold people down and vaccinate them by force, but if any business that refuses to comply faces a per violation fine of around $14,000, how many are likely to defy the decree? Whether it’s constitutional or not is an issue anyone can debate. However, unless and until a court issues a ruling – which may be sooner rather than later, as the Texas attorney general is suing the administration – there isn’t much that can be done about it.

The second group is federal employees and contractors. This is the least surprising entry, and most would probably assume the president has the most authority over these people. In some cases, that’s true – but in others, it isn’t. The president can fire any federal employee that serves at his will. If an agency or department answers to the president directly or to some member of Cabinet, then Biden could order an employee to be fired. Theoretically, if an agency or department was created by executive action rather than an act of Congress, Biden could simply dissolve it entirely, thus getting rid of the employee without having to fire him or her.

Most federal employees could still be removed eventually – even if not by the president directly – but they can’t simply be told, “you’re fired,” and sent home. They must be granted something called a “performance improvement period,” which used to range from 60 to 120 days, but Trump cut it down to 30 by executive order in 2018. Additionally, thanks to the multiple appeals a fired employee is entitled to, it can take anywhere from six months to over a year to terminate a worker, according to the Government Accountability Office. Even in the military, dismissals by presidential edict aren’t as easy as they once were, so long as we aren’t at war, and haven’t been since Congress stepped in, back in 1865.

Then there are federal judges. These employees can do whatever they want, so long as it isn’t impeachable, and their employment is untouchable. Federal judges leave office only as a result of impeachment, retirement, or death.

So, federal judges and any government employee that doesn’t answer directly to Biden – or whose boss doesn’t – is more or less safe, as are most military personnel, for all practical purposes, though all but the judges could have their lives made miserable by bucking the mandate.

Who Holds the Purse Strings?

The last two groups of people threatened by King Joe, First of His Name, are employees of any health care facility or schools supported by federal funds. Presidents often threaten to withhold funding from schools, hospitals, and even entire states – but does the office hold that authority? In a word, no.

Congress controls the purse strings; it always has, and it almost certainly always will. The president might be able to dictate where executive agencies spend the money that’s sent to them, generally speaking, but for Biden to say no more PEL Grant for the students at this university, no more Medicare or Medicaid reimbursement for that hospital would be a bit of a stretch. Certainly – as is the case with all of these mandates – legal challenges would soon follow, simply because these funds were created by acts of Congress that declare the recipients entitled to the money.

The president’s power is, often, the power of influence. That said, Biden stood up in front of the nation and made a few bold claims, some of which have people concerned about a Civil War 2.0. The thing to remember about Joe Biden, though, is that he may well not realize the full import of his words when he speaks them. This is the man, after all, who has spent his entire political career making up the most absurd lies that don’t even have the potential to help him out much, should folks believe him. Think the plagiarized life experience story from the 1988 election year, the much more recent “I used to drive a truck” comment, and every other random falsity in between. He also forgot during the 2020 campaign that he was running for president, declaring, instead, his candidacy for the Senate. 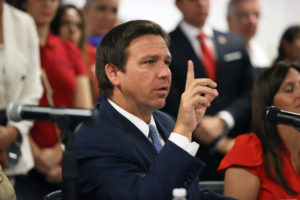 It is entirely possible that the commander-in-chief didn’t even realize he was saying things well outside of his authority. Joe Biden is a man who gets up in front of people and just starts talking, saying whatever comes to mind that he thinks will work out to his advantage.

That said, there’s no reason to believe Biden won’t follow up on his threats and enforce his demands if the administration can find a way around the checks and balances that otherwise limit his power. If we examine his words at face value and assume that he intends to actually follow through, then what? Let’s look at his threat to governors. “If these governors won’t help us beat the pandemic, I’ll use my powers as president to get them out of the way,” he said.

The Insurrection Act of 1807 allows the commander-in-chief to send the military to control states and state governors if the president believes they’re involved in a violent uprising or rebellion against the government. That is the only power the president has over governors – but boy, it’s a doozy.

But now let’s say that Biden declares every governor who defies him a violent insurrectionist and tries to send in the military. This isn’t the 1860s all over again, where 11 of the poorest states seceded from a 34-state Union. Today, 30 of the 50 – a 3/5 majority – are red states. If 30 governors – or anywhere close to that number – told Biden to take his six-point plan and shove it, there isn’t much the president could do. Turn half the country or more into military protectorates? That would be Civil War 2.0 – and it’s unlikely to go the way it did last time. In either case, it would be the end of the Republic. There would be multiple nations where now there is one, or just the one, but with a king rather than a president.

The post Can He Do That? Breaking Down the COVID Decree of ‘King Biden’ was first published by Liberty Nation, and is republished here with permission. Please support their efforts.