Congress is currently considering a large increase in federal taxes on cigarette and nicotine products, as part of President Biden’s “Build Back Better” agenda. Yet a new report illustrates why this is such a bad idea.

Authored by the nonpartisan Tax Foundation, the study analyzes past cigarette tax increases and shows how they helped fuel the black market. Using data from the Mackinac Center for Public Policy, Tax Foundation expert Ulrik Boesen shows that as these taxes increase, so too do illegal smuggling and black market activity.

There’s plenty of data to examine. The report notes that 39 states and Washington, DC have increased cigarette taxes since 2006. With smoking increasingly unpopular as health risks are more commonly known, smokers—despite being disproportionately low-income—have become an easy target for punitive tax hikes.

Boesen finds that as a result of these tax increases, black market criminal activity has risen in many of the most affected areas. New York, for example, has the highest rate of cigarette smuggling with more than 52 percent of its consumed cigarettes arriving illegally from out of state. Next up is California, with 43 percent of its consumed cigarettes stemming from smuggling operations.

And states like New Hampshire with low taxes on nicotine products see massive amounts of outbound smuggling to nearby high-tax states, Boesen reports. So, too, Oklahoma increased its cigarette tax in 2018 and immediately saw a huge spike in inbound smudging—jumping from 30th to 17th on the list of states with the most smuggled cigarettes.

All in all, there is a clear and strong correlation between tax rates and black market activity, as shown in the graph below: 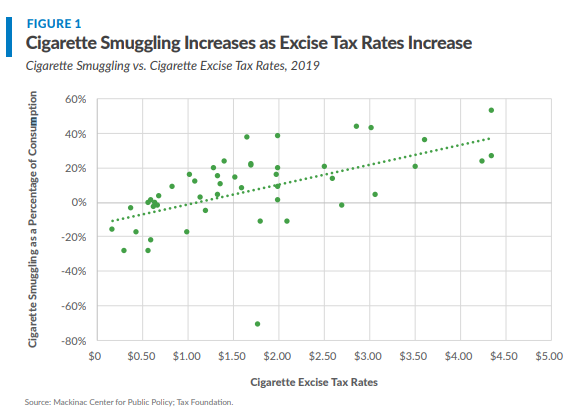 Suffice it to say this isn’t a good thing. Black markets fuel criminal activity and lack the same accountability and quality standards of free, legal markets. But fueling the black market is just another unintended consequence of big government meddling with legal markets.

I’d call that an understatement. And it’s hard to imagine a better example than nicotine products proving this principle. If the federal government hikes nicotine taxes just to squeeze a few more billions out of working-class taxpayers for it to waste, well, don’t be surprised when criminal enterprises see the biggest benefits.

The post New Report Shows Why Congress’s Plan to Raise Cigarette and Nicotine Taxes is Such a Terrible Idea was first published by the Foundation for Economic Education, and is republished here with permission. Please support their efforts.