With price inflation continuing to surge unchecked, America’s central bank, the Federal Reserve, is trying to raise interest rates in hopes of stopping the bleeding. Fed Chair Jerome Powell just announced the most aggressive incremental rate increase seen since 1994. Much of the response has, understandably, focused on whether this will actually be able to tamper down inflation and whether it will trigger a recession.

But there’s another important consequence that will accompany the Fed raising interest rates aggressively—the time bomb on our national debt will start counting down even faster.

Right now, we already have a serious expense in just paying the interest on the $30.5 trillion and counting national debt. Just covering the interest costs federal taxpayers about $900 million every single day!

Under the status quo, interest payments on the national debt were already projected to rise exponentially and require trillions more in federal taxes in the coming years. According to the Peter G. Peterson Foundation, interest payments are projected to “total around $66 trillion over the next 30 years and take up nearly 40 percent of all federal revenues by 2052.”

But, if rates rise more than initially projected, both our future borrowing and some of our existing debt will be much more expensive to finance.

As the Manhattan Institute’s Brian Riedl has projected, higher interest rates than expected will quickly mean the national debt becomes an even bigger headache than it was already going to be. 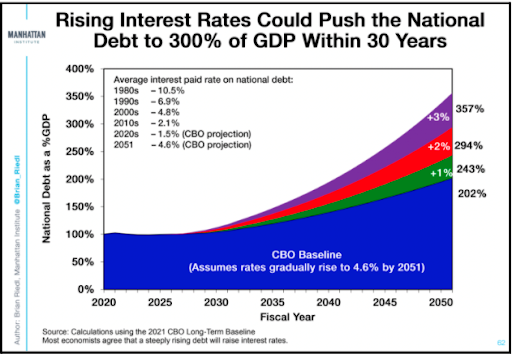 Let me try to put this as simply as possible.

One could still argue that it’s worth it, but this real consequence must be acknowledged regardless. Policy choices inevitably have trade-offs and consequences.

Our leaders refused to spend within their means, instead running up multi-trillion-dollar deficits and printing trillions of new dollars. We got crushing price increases as a result. And we’re also going to face trillions more in taxes as interest rates rise and our debt becomes more expensive.

All of this could’ve been avoided. But all we can do now is hold our leaders accountable so that it never happens again.

The post Why the Fed Raising Rates Means the National Debt is Going to Become An Even Bigger Problem was first published by the Foundation for Economic Education, and is republished here with permission. Please support their efforts.